Harpa, pumpkin bread, and the blue everything

This film is not about making a point as much as it is having a conversation. I have been having unique rich discussions with people I have met, internally considering things I have experienced first hand, and the stories I have listen to second hand. This conversation has been going on now for three years. What will be left on the cutting room floor? How many films could be made from all of this information? This is what is spinning in my head more often than not. I can say I feel full here; my head, my heart, and the inspiration tank is topped up and running at its optimum.

What does it look like when the sun never really sets- it's 10 pm and my room and the hallway has  filled with a red and pink light and everything else is blue...blue water, blue clouds, blue mountains. 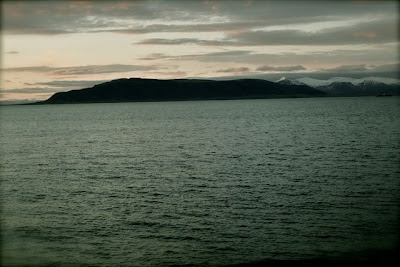 A wonderful friend here told me she still wears a sleeping mask to bed because it's so bright even at midnight. 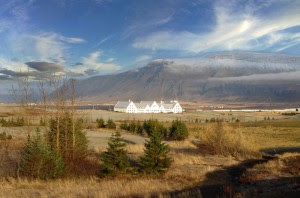 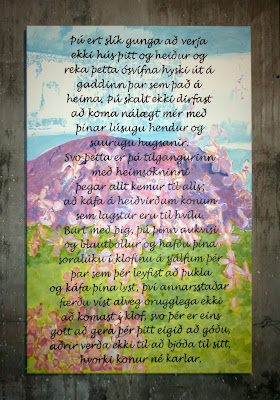 A good friend (Anna Torfadottir)
that I have made here is a visual artist in Iceland and took us to her studio today. It's an old dairy barn converted into artist studios called Korpúlfsstaðir. In this building there is a gallery where the hay mow used to be. The show currently up was under the theme "Aggressive text", which meant that the piece could be very tranquil but needs to have this aggressive text somewhere within it. Anna (the friend that took us here) showed us one of her works that was this lovely vertical piece with flowers, gentle colors, and if you didn't know Icelandic it would seem like it was something really sweet. They translated it for me and it pretty much was about a women saying to a man, you are a pig and you will not place your dirty hands on me, you can put them on your own privates because that is the only place you have a right to put them.
I liked this contrast. 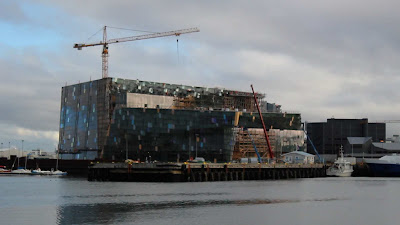 We all then went to Anna's house and had a really great American style dinner with pizza and soda. Tonight this feels like home, not just because of its similarity to the back in the states cuisine but there was something more. I realized it when she brought out the pumpkin bread which was just like a spice cake my grandma makes back in New York. Anna said it was made just for us. Sometimes life has a really intense way of kissing you and punching you at the same time, letting you know you are exactly where you are suppose to be at that moment.
We watched the opening ceremony for Iceland's new massive concert center (HARPA). When we passed it today there were protesters outside. The center has been under a bit of scrutiny. Why you may ask? Harpa was only partially built when the collapse hit in 2008. It seemed to some like a spit in the face to continue with this grandiose structure after the economy had tanked and with cuts to medical facilities, artists funding, and fact that so many lost their entire savings overnight the idea of Harpa continuing seemed to some... patronizing.

I am going to go to some of the awesome free concerts tomorrow and will report back on the experience.
Goodnight pumpkin bread loving friends.
Posted by Wilma's Wish Productions at 2:16 AM